The Stanley Hotel is an Estes Park landmark.

Coming into town you see it on the hill above town, a big white neoclassical building.  With panoramic views, it looks over the Continental Divide of nearby Rocky Mountain National Park.  Lumpy Ridge forms a dramatic backdrop behind it.

Built in 1909 , F.O. Stanley picked the best location for his 140 guest room hotel.  It appeals to people from all walks of life, including royalty and Hollywood personalities.

Listed on the National Register of Historic Places and a member of Historic Hotels of America,  it is a favorite spot for weddings and conventions. 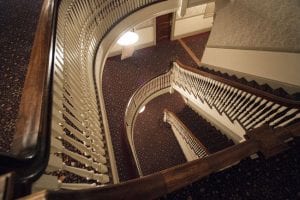 The horror novelist Stephen King was inspired to write The Shining after staying there with his wife.  The hotel has been featured as one of America’s most haunted hotels. It has also been featured on the television show Ghost Hunters where they investigated the hotel for paranormal activities.

Each year The Stanley Hotel hosts summer and winter music festivals in its beautiful music room, as well as several events over the holidays (Halloween balls and Easter Egg hunts, for example).

You can take tours of the historic Stanley Hotel, a Day Tour featuring history, architecture, folklore, and pop culture, and a Night Tour that introduces you to “active phenomena” and spirit folklore.

Do friendly ghosts live in The Stanley Hotel in Estes Park?  The hotel has a long, haunted history.

Besides inspiring the setting of Stephen King’s novel and consequent blockbuster, The Shining, the hotel has had rumored ghost stories of its own for over a century.

The haunted theories date back to 1911 when the hotel’s chief housekeeper, Ms. Elizabeth Wilson, was blasted through the floor of room 217 during a lantern explosion. Her fall was not fatal, however, room 217’s guests have reported strange additional maintenance being done to their room for decades. It is almost as if Ms. Wilson is still there tidying up and taking care of her guests.

In other rooms, guests have reported hearing children laughing and playing outside their door only to open it and find nothing there.

The ghosts of the original builder, Freelan Stanley, and his wife have reportedly been spotted hovering in different locations around the hotel.

A piano is often heard though no one is playing it. Sometimes the lights flicker, or footsteps fade leaving guests wondering about supernatural presences.

It was also in room 217 that Stephen King commenced writing The Shining. During his stay there, King reported hearing phantom children yelling down the hallways. He sensed the ghostly ambiance of The Stanley Hotel and brought one of the greatest horror stories in history to life from it.

Stanley Kubrick, the director of The Shining, followed in King’s footsteps in 1980 and based the film’s famous Overlook Hotel off of The Stanley Hotel.

The film production built a life sized model of the Overlook Hotel in London and supplemented by filming in various locations in California, Montana, and Oregon.

17 years after Kubrick’s critically acclaimed film came out, King hired a new director to film the story more accurately to his novel. This second, lesser known film adaptation was filmed inside The Stanley Hotel exactly as King envisioned it should be.

Stephen King believed in The Stanley Hotel’s unique environment strongly enough to conceive his own twisted, horror story in the midst of it.

The Shining is yet another remarkable development to add to the hotel’s rich past. Hundred year old ghost stories can be hard to refute, especially with one of America’s greatest writers believing in them.

Today, The Stanley Hotel is not threatened by sinister spirits like other establishments that lay claim to haunting. Rather, there are frequent tales of paranormal housekeeping.

Guests may find their things packed, unpacked, or rearranged in unexpected ways. Sometimes, guests wake up and discover that someone folded their blankets or tucked them in while they slept.

Whether the ghosts are real or not, The Stanley Hotel is a special, historical place where curious people can find out for themselves.

Reveling in all films horror, this film festival started in 2013.

It has featured the best of this frightful genre and celebrates the Stanley’s history as creepy inspiration for Stephen King’s “The Shining”.